So how do you make a merging black-hole binary?

So this blog post is something different: it's about my own research. The main thing I do is make computer models of stars in binaries and then compare them to stars, galaxies and other fun things and events in the Universe. I also make as many models and predictions as possible public so other astronomers can use my models in their own studies.


Over the past year I have created my latest set of models which, while not perfect,are still a big improvement on my first go. I was in the process of writing this all up for what I call ”the instrument paper” when I started finding lots of exciting results that I thought I should publish as quickly as possible... which has led to some pretty cool papers by myself and others.


Out of these, the coolest started with the rumour that the LIGO gravitational wave detectors had found something. Gravitational waves come from many sources, but one of the most common is from the merger of binary star systems… of exactly the kind my models can simulate. For a long time I ignored the rumours, but papers by other people in the same field started to appear which suggested the rumours might be worth investigating further.


It wasn't until someone posted a comment on Facebook, quoting an email from someone in the US stating that LIGO had detected the merger of two black-holes, each of around 30 times the mass of the Sun, merging into a single black-hole that I got interested. While a lot of scientists were excited as gravitational waves had been detected for the first time I was excited because black holes are created in stars and we had a new way to determine what the masses of the black holes that are born in stars could be.


It seemed that a lot of researchers thought that these black holes were unusually massive. That is true, and they are more massive than most black holes we have seen in the past, but they’re not too much more massive. Anyway, I like observational data and I like nothing better than comparing it to what my binary models predict. So I started to write a code and made some predictions in the two weeks before the announcement. The cool thing was that we already made the black hole binaries in existing models; we only needed to write a new code to calculate how long it took for the two black holes to merge and this would allow us to see which of our models could produce the observed merger within the age of the Universe.


This work was done in close collaboration with Elizabeth Stanway from the University of Warwick. As she was in the UK and I was in Australia at the time we could take turns working on an interpretation paper with one of us sleeping while the other was hard at work! At the time it was kind of a shot in the dark - the rumours might have been untrue, and we’d have had to write off our hard work as a useful but ultimately futile exercise. Then the announcement was made and we confirmed the masses of the black holes and submitted our paper.


As always we had to go through the peer-review process and we were asked to considerably expand our predictions to include neutron star-neutron star systems as well describe in more detail our code, which had been discussed elsewhere and it will all be in the instrument paper but it was best to also include a description of all the important stuff in this paper. So after a considerable amount of extra work and clarifications to our much improved paper it was finally accepted.


During this time others published very similar papers but with different views and some interesting extensions. Our paper was always about showing that our BPASS code could predict roughly the right rate of black hole mergers and could reproduce GW150914, as well as all the other observations it can predict, where some other similar codes only consider single stars so can’t produce GW150914 type events.


However one really cool and exciting new bit of science we put in was in response to trying to explain why our computer models predicted more massive black holes than some other codes. This is actually a key uncertainty of stellar evolution, how massive is the final remnant formed by the death of a star? The merger of black holes gives us a way to measure this, but it only tells us about the black holes in binary stars. What about single black holes that might been ejected from a binary by a ‘kick’ they received in their natal supernova?


At the same time as GW150914 was being announced, another really quite awesome study (Wyrzykowski et al., 2016) has used gravitational microlensing to find candidate single black holes drifting through our own Galaxy. This technique is widely used to discover planets around other stars, but they also found many possible black holes. What was interesting about the study is they found a number of low mass black holes near the minimum mass that can be created in stars of 3 times the mass of the Sun. Others had suggested these didn’t exist so this was a surprise.


In our models we have a range of possible black hole masses from 3 times the mass of the Sun up to and beyond the masses of GW150914. A really fun thing though is that these single black-holes that were discovered are on average lower masses than those we see in binaries in our Galaxy and those we saw from GW150914 and the other recent similar detections. 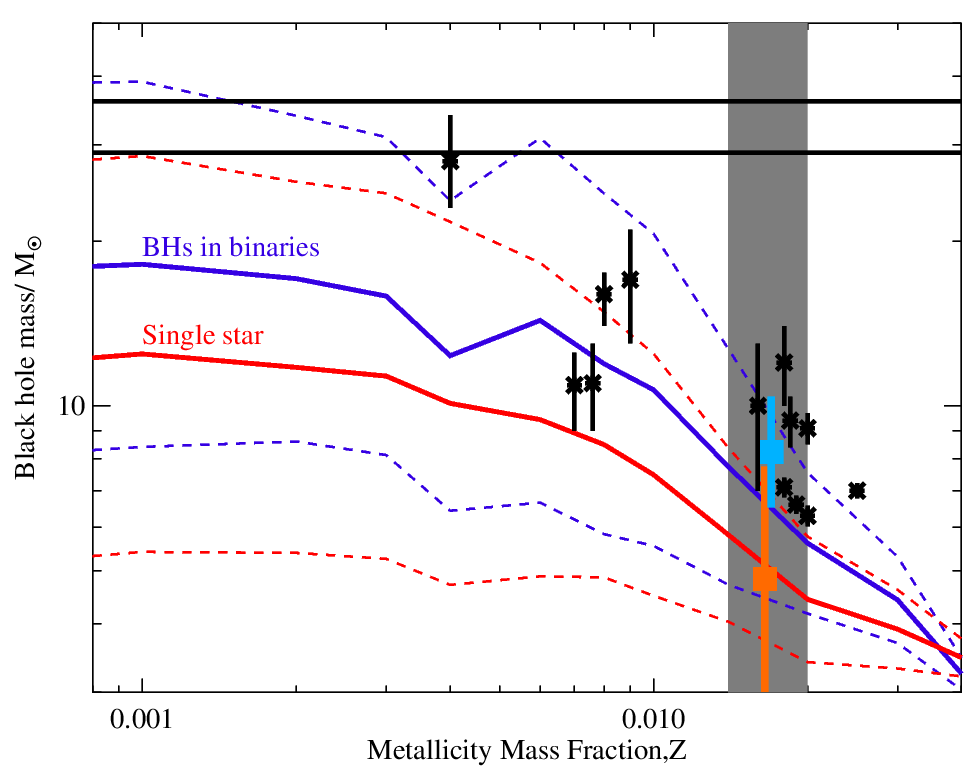 
My favourite plot those is the next one, it is a quite colourful and dramatic plot. Each panel shows the predictions for a different generation of stars in the Universe and the brightest colours indicate where the most common black hole mergers should occur. They range from some of the earliest stars in the Universe (in the upper left panel) to those similar to the ones forming in our own Galaxy (in the lower right). On top of this are the 3 detected black-hole mergers to date of GW150914 (dark blue, top right) LVT151012 (green, middle) and GW151226 (cyan, lower right). Each system is plotted twice as we don’t know which black hole came from which star: the initially more or less massive.


The contours and shading then represent where the masses of the most likely black hole mergers. We can see that GW150914 is only possible at the lower metallicities, while the others are possible in all populations and GW151226 is closer to the typical mass of black hole mergers expected in all the populations.

The one interesting thing is GW151014 is a typical merger at the lowest metallicities which means it might have come from some of the earliest stars to form in the Universe. Although we can’t be certain. To show this we need to do a similar study to some of our fellow astronomers, Belczynski et al., who also modelled in how many stars of different generations were formed at different times through the Universe and how long they would take to merge and so whether they would be observed today. They found either the binary merger was relatively recent or again closer to the formation of the Universe. While this requires lots of assumptions about unknowns in cosmic history, we may try to calculate this with our own models in future.


The key result we wanted to show, and why we wrote the paper, was just that in BPASS our models naturally have these black-hole mergers in. The code does both population and spectral synthesis and it is one of very few spectral synthesis codes that can predict black-hole mergers alongside all our predictions of stellar clusters and galaxy populations. Why? Well the other most common ones assume all stars are single! Only a binary code like ours can get close to the correct black-hole merger rate inferred from LIGO after its first observing run.


We’re starting to find that including binaries makes a key difference to our understanding of the Universe - all the way from distant galaxies to individual stars. Combining the LIGO and lensing results with our BPASS code has added another piece to the jigsaw.