Looking at the (astro)physics of the Starkiller base.

[WARNING: Spoilers for the Force Awakens below!]

So a friend recommended that instead of tweeting about the Starkiller base in "The Force Awakens" I should write a blog post and so people can avoid spoilers. A few weeks after that I've finally got around to writing my first ever blog post. Exciting! Wooo!

I'm not sure what I'm going to write in this blog with time but I'm guessing looking at aspects of science in sci-fi as well as the study of stellar astrophysics. Mainly because they're both things I probably know most about.

Anyway, before you read on there are spoilers below for the movie "Star Wars: The Force Awakens". What I want to do is use the Starkiller base to discuss some aspects of stellar astrophysics as the base "takes the energy from a star and uses it to destroy a planet". I'm mostly going to be using what I saw in the movie in the discussion although I did check out the listing on Wookieepedia too.

Also I'm not going to tear it all down and say "it can't work" I'm going to say "well this is how it could work" given the technology available in the Star Wars Universe. So what is the Starkiller base? Well here is a picture used in the promo-poster (it's really difficult to find any pictures of this thing): 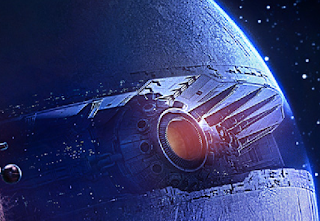 How would you build it?

It looks vaguely "Death Stary" but this time rather than being built as a separate space station it's actually built into a planet (notice the thin blue haze of an atmosphere at the edge). In fact during the movie the Death Star and Starkiller are compared in size and it's roughly of the right scale that the new base is probably slightly smaller about the size of Earth with a diameter of around 4000km (just guessing). This compares to the second Death Star which has a diameter of 900km (although numbers for this vary).

The fact that there is such a big chunk of planet cut out of the planet to fit in the weapon means this weapon is classed as a "planetary scale megastructure". It would be an enormous engineering feat, not just to dig the hole but to stop those cliffs from collapsing and to stop any geological activity on the surface. The Earth for example is a very active place with lots of volcanoes, Earth quakes and mountains. You would also have to drill down into the core and try to keep the hole from collapsing.

To get around this we can assume that material science and "force-field" technology makes this possible. We can should also assume that if the planet is small, i.e. Mars size, it would be geologically inactive. In our solar system both Mercury and Mars are thought to be mostly geologically inactive and mostly solid without a molten core like Venus and Earth. This is because small objects cool down faster than big objects because they have a higher surface are to volume ratio.

How would you power the weapon by a star?

So if we have advanced enough technology and we find the right planet, we can build the base. So what about how the weapon works? According to Wookieepedia and the film's novel (discussed here, it was written by Kevin J Anderson and is disappointing because he came up with the "Kliss torch" a reasonably accurate stellar weapon but that’s for a later blogpost) the base uses a star to collect dark energy that is stored in a containment unit in the base's core until the weapon is ready to be fired....

Okay, so dark energy does exist, it's the reason the Universe is expanding except you won't find very much of it in a star or anywhere in a galaxy. You need a very large volume of space, like in the space between galaxies for it to do anything. Also there isn't much dark matter in star either, so it's not that either.

Fortunately we don't need to be so exotic stars contain an enormous amount of energy. So let us assume that the Starkiller base is designed to use stars like our Sun. This is a good guess as there are a lot of these stars and the star in the movie looked yellow with a convective surface. These both describe our Sun (although our Sun's colour is actually white but that's a discussion for another time).

If that is the case such a star has a luminosity of 3.85×1026 Watts. That's quite alot of energy, it's that many Joules of energy a second. Compare that to your 10 Watt florescent light bulbs lighting you homes. The energy of stars is created at the centre in nuclear fusion reactions converting the simplest element hydrogen into the next element helium. But this energy can't get from the centre to the surface instantly as there is the rest of the star in the way! The energy in the star is in two forms, radiation (i.e. light) and thermal energy of the material in the star.

Now before we go further we have to make some assumptions as to what the Starkiller base actually takes from a star to charge itself. A stellar interior is hot and a good estimate for the amount of energy inside in both heat and light is the luminosity multiplied by its "thermal timescale". This is a number that tells us how long it takes for the star to transport energy and for the Sun is about 20 million years. This is about 2×1041 Joules, to give you a reference point it takes 400,000 Joules to raise the temperature of cold water to its boiling point. Most of this energy is in the thermal energy of the stellar material, a smaller fraction of energy is stored as light.

So there is certainly enough energy, the interesting question is how much do we need to destroy a few planets as in the movie? A planet is held together by gravity and to "explode" it you would need around the amount of gravitational potential energy stored in the planet, for an Earth like world this is of the order of about 1032 Joules. Therefore we only need maybe a billionth of the thermal energy of a star to destroy a few planets.

Getting heavy with gravity.

What about stellar astrophysics?

So the final question, how do we suck out the energy from the star? Well in the movie we see a stream of material flowing towards the planet. The good news is we know stars actually do this! When I first saw this in the movie I realised it's going to make explaining mass transfer in binary stars much easier in lectures.

A star can grow to such a size that the outermost parts of the star fall under the influence of a companion star's gravity and so material is transferred across. Now the good news is that in the Star Wars Universe they clearly have artificial gravity, so you can imaging using some sort of gravity projector or gravity probes/satellites to attract material from the star. Anyway they only need a billionth of mass from the stellar surface, around 2×1021kgs (1/3000th of an Earth mass) to have enough energy to destroy a few planets.

Now we actually understand how stars respond to mass loss quite well because as mentioned above stars do this all the time in binary systems. The problem is with a convective surface the star should expand as you remove mass from the surface. So the star should get bigger and brighter! We don't see this in the movie, why? Well the star takes time to respond, to rapid mass loss it is the dynamic timescale of a star that is important. This is the time it would take for a star to collapse in on itself if there was nothing to stop it. For the Sun it's about 30 minutes. So for the star to shrink as we take mass off we need to do it in about this time or shorter. Luckily this is about the time it takes in the movie.

The problem being is that once the weapon stops charging the star is going to react and "bounce" back. Although it will take longer to get brighter again and for energy to flow back into the outermost layers. This will not happen on the dynamic time-scale but on the thermal time-scale of 20 million years! So this is why the Starkiller base has to keep travelling to different stars to charge. Although they can go back and reuse the same star after that, rather long, time.

We could also ask how does the base fire and get its energy to the target. I am going to avoid that question, wave my arms and say "wormholes/hyperspace". With releasing all that energy into the wormhole where it might be accelerated so it hits the target as a beam (I say not just waving my arms but flapping them vigorously).

So in summary, with the technology of the Star Wars Universe the Starkiller base is probably "possible". There are some issues with how the star would react but there is also plenty of energy available without having to go to any "dark energy". Although how you deliver the weapon is way beyond anything we could do today.

I hope that was interesting, as I mentioned about there is another superweapon, the "Kliss torch" which I might discuss in a future blog post. I also plan to write about how massive stars can be, why stars become red supergiants and other interesting stellar astrophysicsy stuff. Let me know if you have any requests!
Posted by JJ at 18:37